The Brothers that just do Gutters Comes To The Chattahoochee Valley!

Being a Chattahoochee Valley gutter installer means being local and focused. GA The Brothers that just do Gutters is now open for business and owned and operated by long-time-local resident Luke Smith.

Prior to purchasing a Brothers Gutters Franchise, Luke spent most of his career in service jobs, with a large chunk of that time spent working for a lawn care company. His favorite aspect of the previous jobs he held was being able to work with people and dealing with clients. Luke established a great relationship with this lawn care company and shared that he only decided to move on simply because he “just had gone as far as he could, and it was time for him to look for something more.” 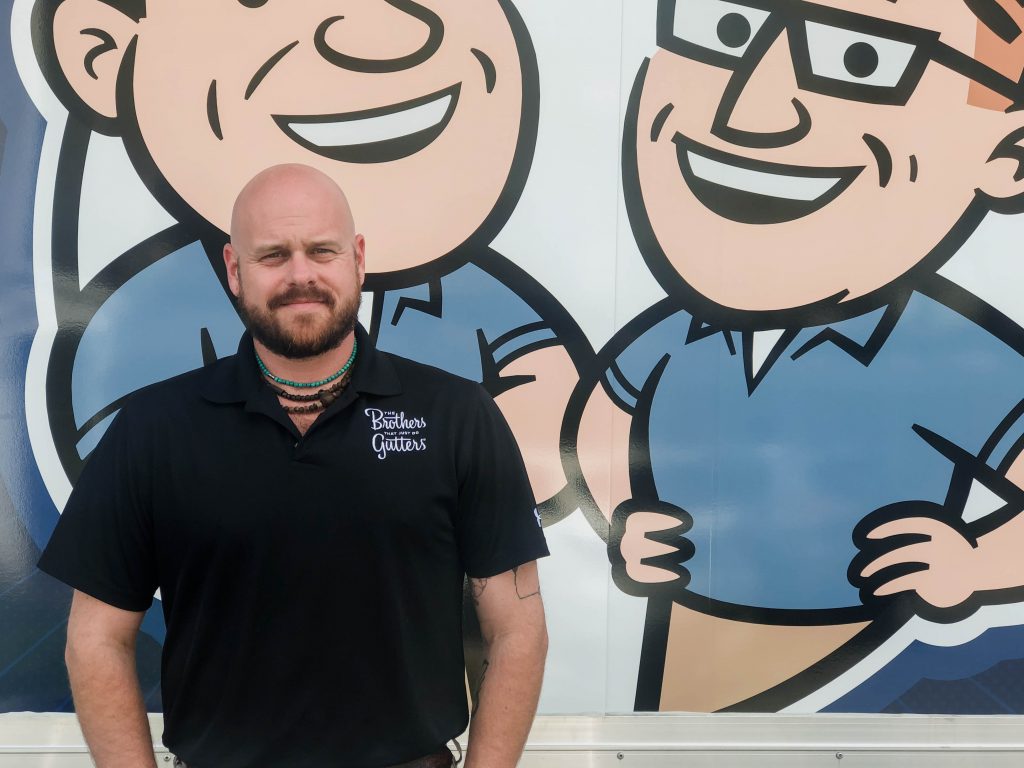 Luke discovered The Brothers that just do Gutters Franchising opportunity when his parents were having water issues in their home due to poor/minimal gutters. His brother David called his friend Jeremiah Boles (L-VA Brothers Gutters Franchisee) to help with his parents’ gutters. After that conversation with Jeremiah and knowing that Luke was looking for his next career move, it dawned on David that A Brothers Gutters Franchise could be the right fit for Luke. “David looked at my parents’ house, then looked back at me and my dad and he put his hands in his head and said I don’t know why I never thought of this before” Luke explained, “But, Luke, I think you’d be perfect for this opportunity.”

After that, Luke spoke to Jeremiah and got a feel for what it’s like to be a Brothers Gutters Franchise Owner. When talking to him, Luke loved the passion Jeremiah had. “I just really appreciated Jeremiah’s attitude towards something that he worked really hard on,” he said.

During this conversation, Jeremiah had advised Luke to “just call Ken” (Franchise Founder) to get more information on the opportunity and this was extremely surprising to Luke. “You mean like the owner?” he said. Later Luke recognized that it really was as easy as speaking directly to the Franchise Founder!

After speaking to Ken, one of the next steps of the process was attending a “Meet The Team Day” in NY where Luke would get to see the corporate office and personally meet the entire franchise team. “Meet The Team Day was extremely pivotal for us in making our decision,” Luke said, “I can 100% say that the initial impression that we got from the way that this day went, was one of the main reasons why we wanted to continue this whole process.”

What impressed Luke the most during his first visit in NY was the company culture. “The installers were totally encouraging to each other and built each other up in a way that I had never seen in any type of contracting business,” he said, “They are normal dudes that just had really awesome instruction when they got here. That culture that we saw the first day was something that I knew I severely wanted to duplicate.”

He even went as far to say that he “kept trying to find the person who was faking it because everyone seemed way too excited to work there” and he had just never witnessed that before. But, after spending two full weeks in NY for training after signing on as a Franchisee, Luke confirmed that what he saw on the first day remained and was genuine.

Luke feels more than confident in the support given to, not only franchisees within the system, but the franchise team at the corporate location. For this reason and several others, he feels confident in bringing this business to his life-long local hometown! “I really feel like the entire Chattahoochee Valley will benefit from the product, the quality and everything that comes with what we are purchasing in the franchise system,” he said.

Luke and his wife, Hannah, have been married for 5 years and have one son named Moses, and one daughter named Elizabeth and are both long-time residents of the Columbus area! They love that their kids get to go to the same schools that Luke and Hannah did!

Since Luke has been a local resident to the Columbus, GA area since the age of 5, contributing to the growth of the local economy is very important to him and Hannah. “Hannah and I have always appreciated any kind of local industry or infrastructure. Any time we go to a new town or city we love finding local spots,” he said, “So, to be able to purchase a franchise that is all for local business and local industry, was something that was very important to us from the very beginning.”

In this efforts to stimulate his local economy by opening up his own local Brothers Gutters business, he hopes to be able to employ many locals, and provide an outstanding service to his neighbors and the surrounding communities. “I would love to be known as a franchise owner that is respected in his community as a fantastic place for people to work,” he said.

You can find comfort in the fact that when your hire The Brothers that just do Gutters in the Chattahoochee Valley, you are hiring a local-family-owned business with an entire career of experience in the customer service industry! We are your Chattahoochee Valley Gutter Installer now servicing the local Chattahoochee Valley neighborhoods of Greenville, Hogansville, LaGrange Woodbury Mauk, Box Springs, Buena Vista, Cataula, Cusseta, Ellerslie, Fortson, Hamilton, Junction City, Lumpkin, Manchester, Midland, Omaha, Pine Mountain, Pine Mountain Valley, Richland, Shiloh, Talbotton and more!