The Brothers that just do Gutters Comes To New Milford, Connecticut!

Being a Danbury, Connecticut gutter installer means being local and focused. It means providing the best service and gutter products available to Connecticut homeowners. A gutter system is your home’s first line of defense against rain water. Because of this, having a reputable gutter installer to service your CT home is so important. You can find comfort in the fact that when you hire The Brothers that just do Gutters you are hiring a local-family-owned business with 7 years of experience within the gutter industry and the Brothers Gutters Business system.

The Brothers that just do Gutters, CT is owned and operated by long-term Brothers Gutters NY installer turned franchise owner, James Morrison and his wife Tiffany. James started working with The Brothers that just do Gutters in NY as an installer in 2011. At this time, he had no experience in the industry, but followed the recommendation of his (now) father-in-law to work for a friend’s (Ryan Parsons) company. At first, as an Apprentice Gutter Installer, James did not envision staying with the company for very long. Instead, he looked at this experience as a stepping stone to his next career. However, it didn’t take long for this perspective to change when he started to catch onto the vision, experience the company culture, and see the potential for growth within the company and through the business system. 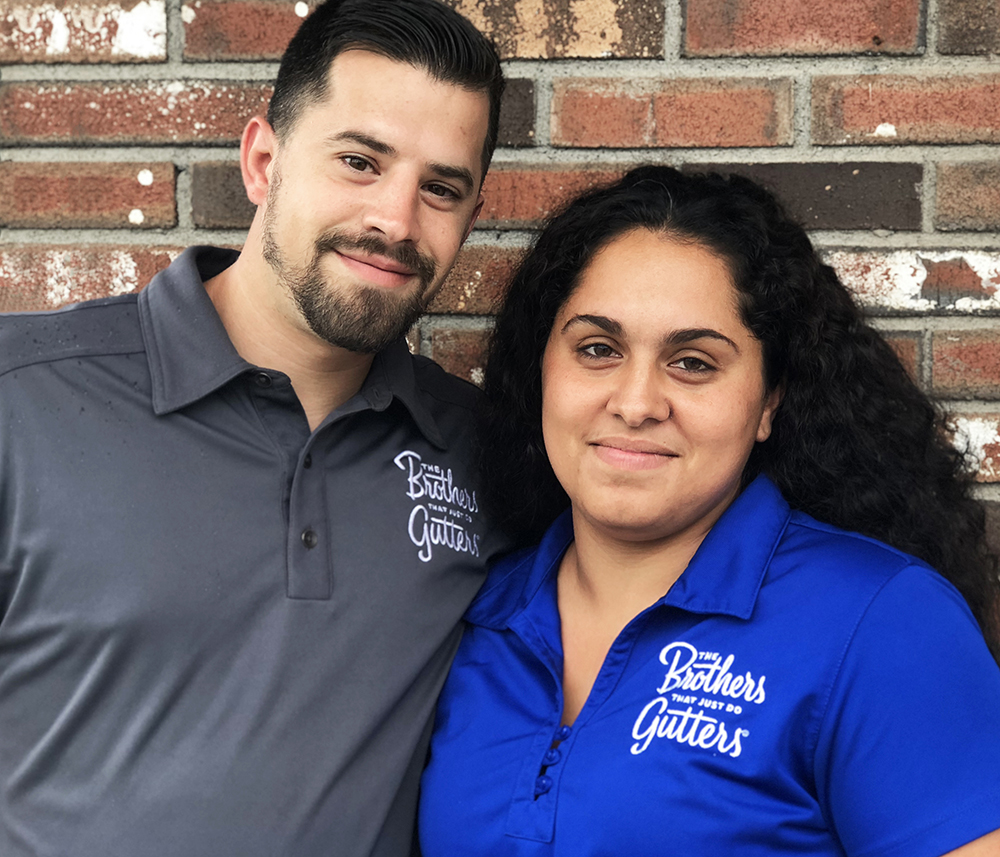 “I think coming up in the company and really cutting my teeth here was probably the best route to go to start a franchise. I mean who better qualified than someone who was brought up in the system and implemented all of the changes that were made along the way?” James said. As James continued to advance within the company, he realized that he had grown to a top installer and that there was not much room left for him to advance. At this point he realized (after seeing the success of the NY division, and being brought up in the business system) that his next move was to purchase a franchise of his own. James’ wife Tiffany also agreed that buying a franchise was the best logical next step, and fully supported his decision. “It took him about a year/year and a half to decide on purchasing a franchise,” said Tiffany, “When he decided, I just had full support for him and this decision and I feel fully confident in watching him grow through the years within the company that he can take this on.”

James credits NY’s success and growth as one of his main inspirations for starting a franchise of his own. “When I came on in 2011 there were only two trucks and about four guys in the field,” said James “I’ve seen how they’ve blossomed into a company that now has eight trucks and sixteen guys, and it’s inspiring.” Ken and Ryan helped to give James the confidence and support that he needed to take the leap into business ownership. But, they weren’t the only ones within The Brothers Gutters Franchise system that inspired him. “Jimmy Olang (PA Franchisee) trained me back in the day to become a head installer. Being on the truck with someone for a year or two, you have a lot of conversations,” James said, “I actually convinced him to start his own franchise years ago, and he later on ended up convincing me that it was something I should do as well.”

James feels confident that he can take the successful business system built over the course of 19 years and effectively implement it into his own business in New Milford, CT. During his 7 years with The Brothers that just do Gutters, James acquired extensive knowledge, skills, and training needed to provide excellent products and services within the gutter industry to homeowners. Tiffany and James met 9 years ago and are local residents of New Milford. They attend and take part in a number of local Connecticut events and activities together with their 5 children! The Brothers that just do Gutters is your reputable Connecticut gutter installer now servicing New Milford, Danbury and surrounding CT areas and neighborhoods!