Track it to Crack it 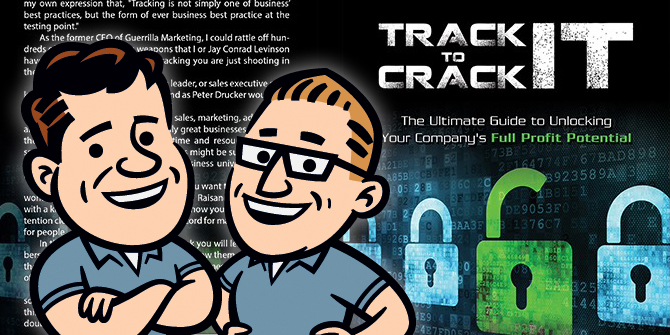 Did you start your business because you were good at doing Something, and then you decided to turn that Something into a business? Congratulations! That is wonderful, and it says a lot about you. You are a person who has the guts and gumption to take some risk, and that category is reserved for only a very special type of person.

Most entrepreneurs started this way. This also means, as the business owner, you now wear all kinds of hats; a hat for sales, marketing, accounting and fulfillment. All the responsibilities of the business have fallen straight on your shoulders, at least for the moment.

Let’s say that you have started your business, and have been operating a few years. You have brought on some salespeople, and you are actively spending money on marketing. You sort of have an idea of how things should run in your business, but in a very broad sense. Now you want to take it to the next level, so somehow you need to ramp it up and start growing. Where do you start?

The challenging part here comes up in a couple ways. First of all, people opening a new business for the first time have not necessarily attended a formal business school, and have not had the experiences in that particular School of Hard Knocks yet. Just because a person is good at doing Something does not mean they understand everything that goes into running a business: sales, marketing, accounting, training, and managing. There is a definite learning curve, and the sooner it can be learned, the better for the business.

Second, there are only 24 hours in a day. As new business owners, the business is usually understaffed and overworked. Maybe it is even a one-man band with that one man wearing every hat. Time and time management becomes an issue. Where is a person’s time best spent?

If your phone is ringing, you have probably been spending some money on advertising and have a sense that something is working because the phone is ringing. However, as the number of dollars spent increases, a nagging thought starts lingering in the back of your mind. “I wonder which advertising is really bringing in the phone calls.” Knowing that some is working and some is not, you quickly become familiar with the adage which has been tied to merchants as far back as 1860, and the founder of the first department store, John Wanamaker, that “fifty percent of my marketing works. I just don’t know which fifty percent,” Who coined the phrase originally, who knows? That does not matter. What matters is that the same issue business owners faced almost a couple hundred years ago is sometimes still a real dilemma for business owners today.

Have you ever had that gnawing in your gut as someone sits before you and gives an offer to do more marketing for you? They ask the stupid question, “Do you want to grow your business or not?” Sometimes I wonder what they would say if I answered, ‘No, I’d prefer to just sink my business right into the ground.’ That is kind of an annoying question, isn’t it? The thing is, they have you in a Catch-22, and they know they are messing with your mind! Your brain tells you that you have to market, yet your gut tells you that you are sick and tired of spending money and not knowing whether or not it is working.

This is the position we were in before we decided we needed to change. We were spending a lot of money on marketing and had all kinds of salespeople, but we had no way to measure who was selling what, nor did we know what the cost was to us per salesperson, per advertising source and per service and product we offered. We knew that if we had this information, we could make better decisions with our marketing and sales departments, and so we set out to tie it all together.

The starting point for us was to track our leads, sales, and marketing. In turn, it answered these four questions:

And that made all the difference.

To demonstrate my point a little more clearly, let’s look at Ryan’s company.

Ryan and his brother, Ken, have had a gutter business for about 15 years in Poughkeepsie, NY. Ryan always kept good records, but he did not really know how to use all the numbers he had gathered. He said he was sick of “just making” payroll each week, and knew there was a way to get around that to even out the cash flow. It was not until they hired a business coach who was pretty savvy with numbers, however, that Ryan was able to pull his mind around the numbers and put them in an order that made sense.

This particular company needed to do some price adjustments, and they were having a hard time justifying the increase in their minds; but when they looked at the numbers, they had to do what made sense for the company. They had to take a look at the industry as a whole to see what could be charged. They also had to determine their own gross margins to make sure that it was profitable for them. Then they had to really outshine their competition in both service and quality in order to justify their increase. It was a mind game for Ryan, and in the end he said he just had to “let the numbers decide”. For him, that has taken away a lot of what can cause anxiety in running a business.