The Brothers that just do Gutters Comes To DFW Texas!

Father-son team Jeff and Jamison Miller are our newest Brothers Gutters Franchisees in the S-DFW Texas area! Being a DFW Texas gutter installer means being local and focused. As the previous owners of JPM Seamless Gutters, Jeff and Jamison already know about servicing local homeowners!

The Millers started their own gutter business about four years ago. Operating as JPM Seamless gutters, they found success in the industry, but the growth was slow. “We just weren’t really growing year-to-year,” said Jamison, “we weren’t necessarily staying stagnant, but we just kind of plateaued on what we could achieve.” That was when they realized that “there was a bigger picture out there” that they just weren’t seeing, prompting them to look into franchising. 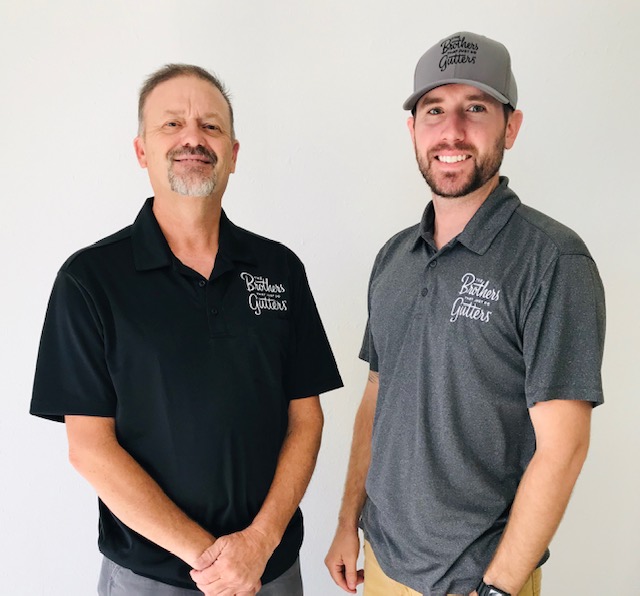 From the beginning of Jeff and Jamison’s journey as a gutter team, they taught themselves the trade and the skills they possess today. A lot of these self-taught skills came from watching Youtube videos and utilizing other self-help resources. Jamison actually cites Ken and Ryan’s videos as some of the learning tools he used, four years ago.

Jeff found Ken and Ryan’s situation to be very related to his and Jamison’s for several reasons. The first reason being that Ken and Ryan started out just like him and his son. “They started out like us, just the two of them, and have grown to a multi-million-dollar corporation,” he said “they now have 10 truck going, and that’s our dream.” Additionally, Jeff was attracted to the fact that The Brothers Gutters system is very family oriented. Ken and Ryan are brothers, and many of our other franchisees are husband and wife teams. “It’s a family thing,” said Jeff “And I appreciate that.” These connections coupled with our reputation of being one of the best gutter companies in the industry is what sold him on our opportunity.

“I am excited to implement the system that The Brothers that just do Gutters has in place,” said Jeff. In the pursuit of finding the growth him and his son have been looking for, they decided it was time to “choose the best in the business” to help them get there.

Jamison also watched other franchisees within the system flourish and was intrigued by their quick growth. Particularly Nathan and Cara Hiebert in San Antonio, TX who also previously owned their own gutter company before converting to a franchise. Seeing Nathan’s success helped to solidify Jamison’s desire to sign on!

Being a father-son team is something both Jeff and Jamison cherish very much. Jeff says that his vision as a father is to “leave something for his son and his son.” Jamison has a boy on the way, and he hopes that he can pass this down to him as something he can not only work within, but also grow with. Jeff worked with his father when he was younger too. It is very important to him to be able to now work with his son, and hopefully see Jamison work with his own son in the future in something they built together.

As Jeff and Jamison grow their business to new levels under the Brothers Gutters brand, they hope to expand to 10-15 trucks and operate in more territories.

The Millers have already created a service in their local hometown for their customers that stands out amongst competition. They feel even more confident in, not only the service they can provide to customers using our system, but also the career opportunities they can provide to their community as they grow!

When hiring The Brothers that just do Gutters in the DFW area, you can feel confident in their integrity, and the service that you will receive. The Brothers that just do Gutters are reinventing contractor service for all of their clients. We are your DFW Texas Gutter Installers now servicing the local DFW neighborhoods of Cedar Hill, Crandall, DeSoto, Ennis, Ferris, Duncanville, Lancaster, Palmer, Red Oak, Rosser, Scurry, Seagoville, Waxahachie, Alvarado, Burleson, Mansfield, and Midlothian.